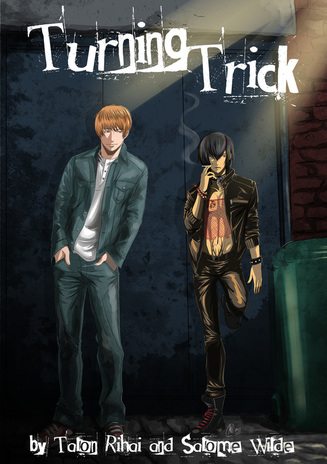 Mistiqarts' cover art concept
Jen has been a whore for as long as he can remember. He's managed to put a painful past of mistreatment mostly behind him, thanks to the care and guidance of Ko, a trans hooker who took him in years before. Now, Jen has the skill, control, and life he wants--mostly--and hopes to repay Ko's kindness by taking on a protégé. She introduces him to Patrick (a.k.a. “Trick”), a kid off the streets who’s tired of being exploited. Jen lets him move into his spare room, certain he can keep his emotional distance ... but there’s something different about Trick. There’s something special that happens when they’re together. But, when stories of vicious beatings of local hookers (who all look suspiciously like Jen) begin to circulate, there may be more to worry about than falling in love.

Tidbit: from Trick's first paid experience, with Jen and a carefully chosen client.

Perry smiled kindly and gently ran a finger down Trick’s pale arm. Trick watched him do it, and blushed. Jen controlled his pleasure at the reaction, while Perry did not. “Oh Jen, he’s delightful.”
“He is, isn’t he?” Jen, comfortable in Perry's lap, winked at Trick and traced a finger around the client's ear. “I could get jealous, if I were the type.” Trick’s eyes widened again, and Jen could easily guess he was surprised at the mention of the “j” word. So many things Trick was going to learn tonight; Jen couldn’t remember ever having been so innocent.
“But that’s not your style, is it?” Perry answered, with a chuckle.
“Nope.” Jen leaned over and brushed his lips across Trick’s. “You’re doing great,” he breathed against Trick’s warm mouth. Perry's erection under his ass moved. Their client clearly liked what he saw.
Trick gave a tiny but visible shudder. “Jealousy just gets in the way,” he chimed in.
Like a teenager on a first date, thought Jen. He very nearly was.
“He’s fresh as butter,” Perry murmured, nibbling Trick’s ear. “Such a pretty, pretty boy.”
He was that, Jen agreed. He truly was. Jen rose and stretched, giving Perry an eyeful of his unfastened jeans hanging low on his hips, the tip of his erection peeking from his exposed thong. “Perhaps we should move Butter Boy here to the bed...before he melts.” 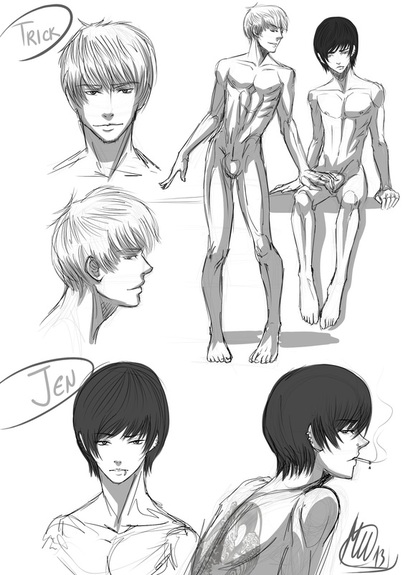